THE 100TH ANNIVERSARY OF THE G.S. LANCASHIRE CUP 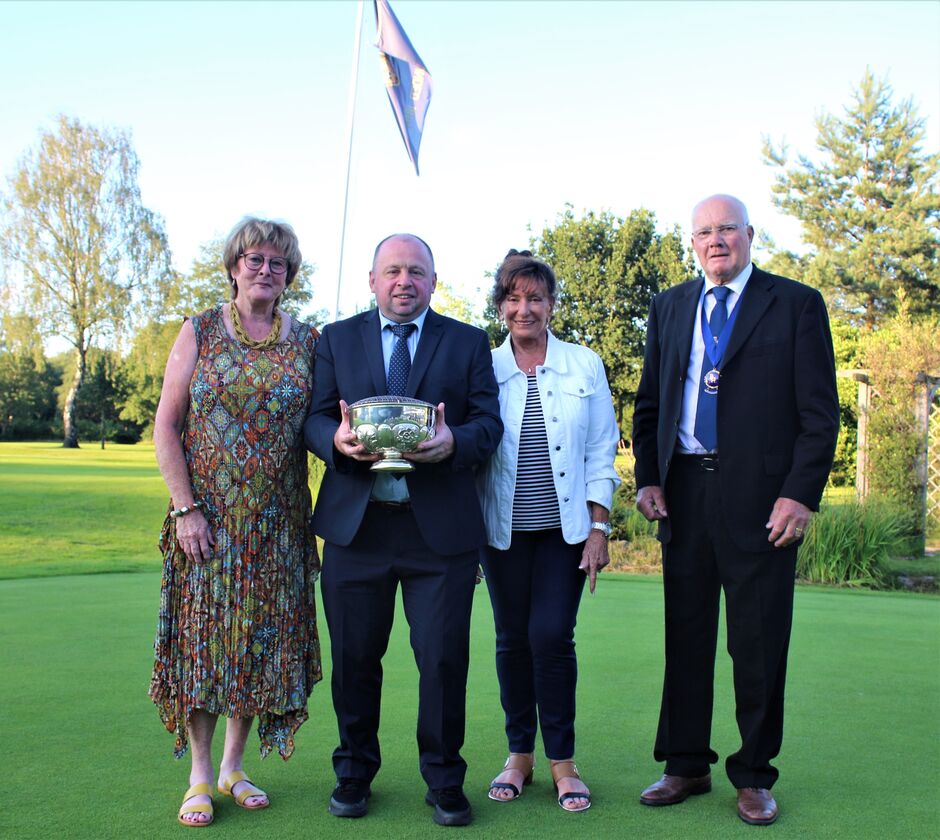 The 100th Anniversary Winners of the G.S. Lancashire Cup

The 100th Anniversary of the G.S. Lancashire Competition was played at Leigh Golf Club on 11th July 2021. This was the first time that Leigh Golf Club had hosted a Balfour & Houldsworth Competition and it turned out to be a very successful day. The sun was shining, the greens were, as one player commented, like axminster carpets (41 Birdies) and players were getting a good run on the ball. What more could one ask for?

The field was made up of 136 players from 25 different clubs. For the first time the Tee-sheet and card labels were not printed until 6.00 am on the morning of the competition, to allow for any overnight handicap changes brought about by the World Handicap System. Some players were surprised to discover that their handicaps had changed since the previous day!

The first team out at 9.10 am, made up of Kirk Hamilton (Flixton GC), Germain Peters (Sale GC) Caroline Fannon and Kenneth Knight (High Legh Park GC), set the early pace with a team score of 80 Points.  This score led the field for the first two hours until J.M & Janina Travers and F.G. & Helen Bailey (Leigh G C) came in with an 84.

Tensions ebbed and flowed as the evening wore on and two more teams came home with 80 points and one with an 81. However, the Worsley ladies, Carol Batchelor and Ann Jones, accompanied by Ian Watson (Whitefield GC) and Michael Lawton (Prestwich GC), took over the lead with a score of 85 points.

A late challenge came in from the Leigh Captains Allan Wain & Helen Pennington, accompanied by past winners David and Lynda Knapper, whose 84 points managed to secure them second place on a card-play off.

It had been decided not to hold a Presentation after the competition closed, since it was more than likely to clash with a certain European Football Final. The G.S. Lancashire Cup would be presented to the winner on a suitable occasion at their own club.

As things turned out, unfortunately the European Cup did not “Come Home”, but the G.S. Lancashire Cup “Went Home” to Worsley Golf Club where it was first played for 100 years ago in 1921. B&H Chairman, John Farmer presented the G.S. Lancashire Cup to the winners during the course of a Worsley Ladies Presentation Evening. Unfortunately, Ian Watson was not able to attend.

On behalf of the B&H Competitions Committee, John Farmer expressed his thanks to Leigh Golf Club for hosting the competition and for the excellent state of the course and the services provided to players in the Club House. A special word of thanks went to Leigh Captains Allan Wain & Helen Pennington for their help with promoting the competition.

A total of £820 in Prize Vouchers was awarded to the teams to share and spend in the Pro’s shop: 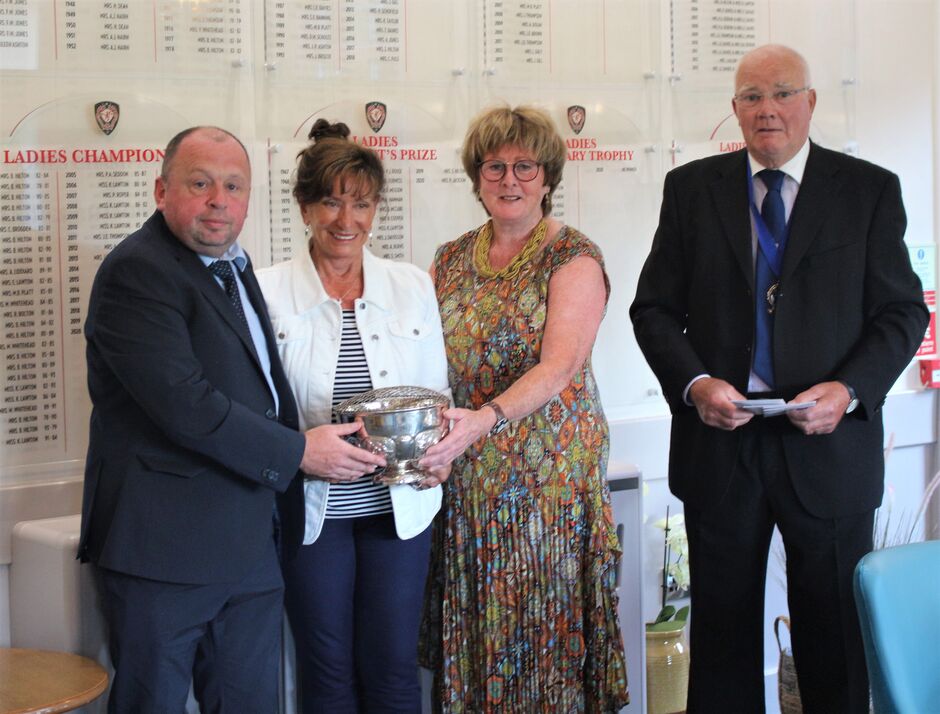 Ad Hoc Presentation on the night.

Pat Jackson presents the Leigh Captains with vouchers to share between their second place team
and a "thank-you" cheque for the club for hosting the competion. 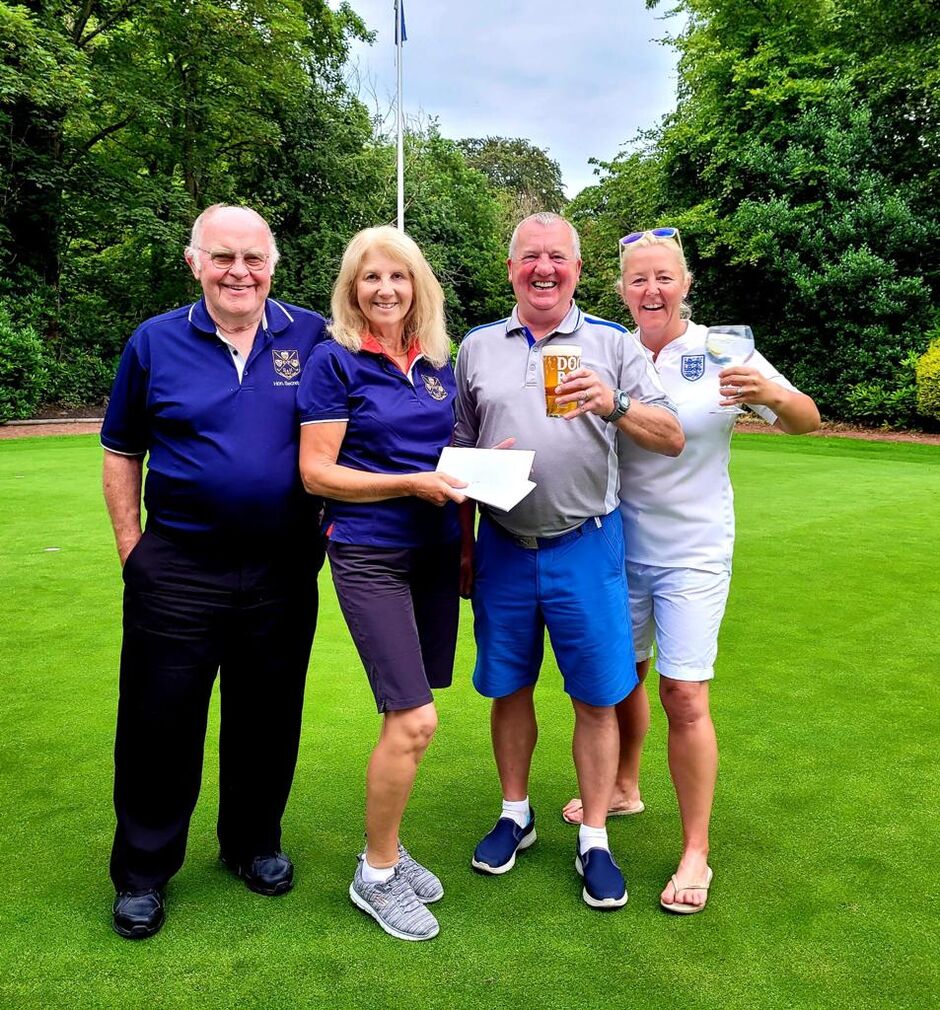 CLICK HERE TO VIEW THE FULL RESULTS OF THE 2021 GS LANCS.

The 2022 G S Lancs will be played at Rochdale  Golf Club.  The Tee-sheet is now open for those who would like to secure their preferred times.