Once again it was good to see that the heavy rains of the previous days had blown over and the B&H Committee members were able to set up a reception gazebo in the car park at Stand Golf Club ready for the 2020 Houldsworth cup. It had been carefully planned out in light of the covid-19 regulations, that teams were allowed to progress from the car-park to the practice area, from there to the putting green, and when it was their turn they moved to the first tee. Sunny but bitterly cold, was the early morning weather report.

The 8.00 am pair of John Caveney and Martin Hill of Bury Golf Club set the early pace with a very commendable 8 Up. However, ten minutes later they were pushed into second place on a Card Play Off by a pair which followed them out at 8.10 am, namely Nick Stokes and David Minshall of Worsley Golf Club.

For a couple of hours, it looked like these could be the best scores on the day, that was until Gary Duncan and Anthony Wyatt, both members of Stand Golf Club, returned with a very challenging 11 Up. They were followed out by last year’s winners John and Luke Aikenhead. However, this year it was another member of the Aikenhead family, Joel, along with his partner Steve McDermott of Ashton-on-Mersey Golf Club that nearly matched the Stand pair with a 9 Up.

A third 8 Up was recorded by Stuart and Josh Faulkner of ChorIton-cum-Hardy Golf Club as the daylight began to fade. This secured them third place on a Card Play Off, pushing  Nick Stokes & David Minshull, the early leaders into 4th place and John Caveney & Martin Hill out of the prizes into 5th place.

A number of pairs had withdrawn from the competition because of the need to isolate in accordance with covid-19 regulations. However, every space was filled as a tee-time became available. The fact that it had been necessary to move the competition from June until October meant that the tee-sheet had been reduced by just over an hour because of day-light limitations. Nevertheless, 126 players took part and between them they represented 20 clubs from across the area. Stand Golf Club provided 18 of the pairs, which took part in the competition, while Ellesmere, Withington, Worsley and Disley Golf Clubs were the home clubs of a further 44 pairs.

Balfour and Houldsworth Chairman John Farmer thanked Stand Golf Club, first of all for being able to reschedule the Houldsworth Cup from its original date in June, and then for facilitating such a superb day as regards the arrangement for golf and the catering provided. 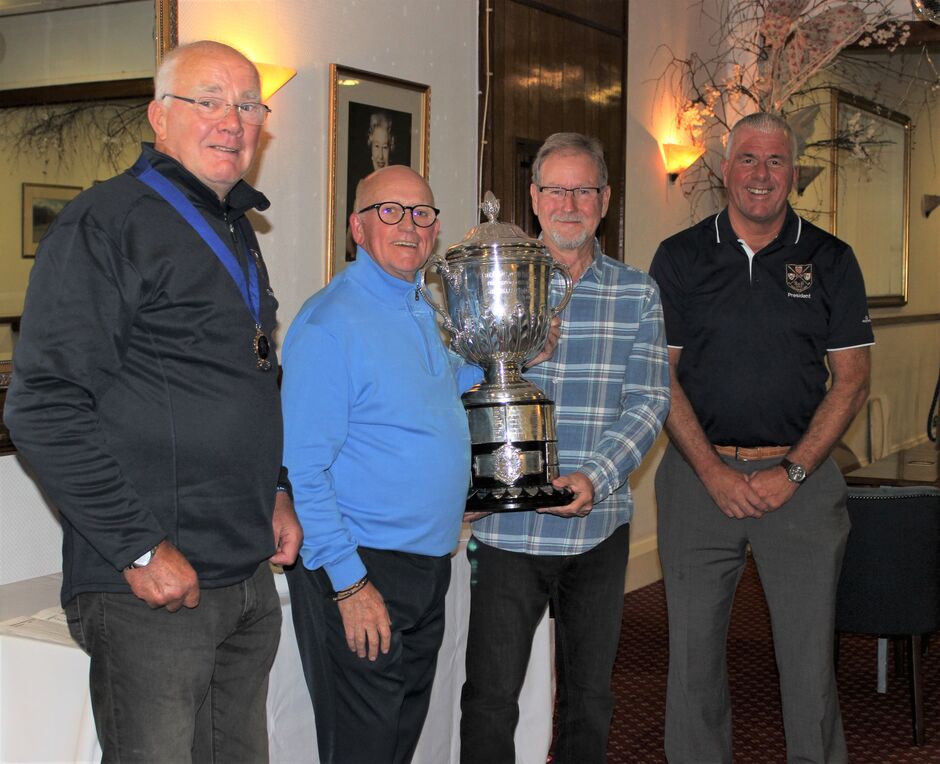 present the Houldsworth Cup to the 2020 winners Anthony Wyatt and Gary Duncan.

CLICK HERE to view the full results of the 2020 Houldsworth Cup.